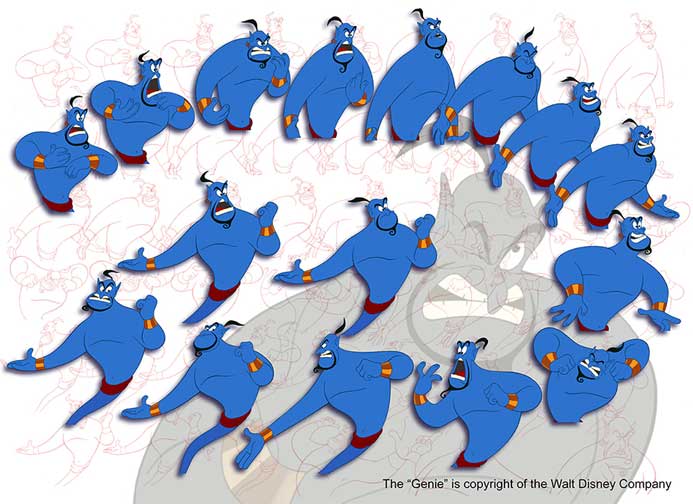 I was browsing through some old emails and came across a message I saved in a folder from none other than one of my animation Heroes the great Eric Goldberg -A man whom I classify as a modern day Ward Kimball and a genius of Cartooning and animation. He can be as harsh and dynamic as Chuck Jones and as subtle and goofy as the legendary ward Kimball. Goldberg has created some of the most influential characters in the history of animation – most notably the Genie - A character that in my opinion sparked the appeal factor for the fast talking adult wit in the modern medium of animation storytelling.

Many years ago when I was working primarily as an animator and had never even contemplated a storyboard panel I was commissioned a task of animating a test with the Genie character for a bid to ‘The make a wish foundation’ (The test is below). Naturally I jumped at the chance and picked out a random piece of dialogue from Robin Williams (Hook) and thrown my self into it. The job ended up being animated by the master Eric Goldberg him self, and rightly so as my feeble attempt bares no comparison!

A few years later when Traditional animation was so far in decline that I was contemplating a career change I decided to write a message to Eric Goldberg and ask his opinion of my test. I had no delusion that I would obtain work at Disney from it - I sent it more in a ‘could I have been a contender’ spirit as I had always dreamt of animating on a traditional Disney feature but as traditional appears to be virtually dead I knew it was a dream I had to cast aside – yet I still just had to know what would a master such as Goldberg or Glen Keane or Andreas Deja etc… have made of my work. So I taken the plunge and sent Mr.Goldberg a message asking him to pull no punches and break me down as he would any animator working for him. Of course I knew it was a long shot and did not expect a response. However it was of great surprise and delight that Mr.Goldberg responded and it brought a huge smile to my face! His response along with my test is below!

Dear Arshad-
You have learned well, my son! Your Genie animation is very fluid and funny, and yes, with that quality, you could easily have been on the Genie unit. If I were working with you personally, I’d probably have you push the eye shapes for greater expression and quirkiness. Also, I probably would have pushed for even snappier timing in a couple of places. That said, you should bear in mind that these types of comments are the same as I would give to any animator on the unit, so you should feel proud that you got so close on your own. I’m particularly impressed with your handling of Hirschfeldian shapes in movement, particularly shoulder and spine reversals throughout the piece.
I hope this brings you some closure, and by the way, don’t give up on 2D yet... It’s coming back!
Best,
Eric Goldberg

We use cookies to ensure that we give you the best experience on our website. If you continue to use this site we will assume that you are happy with it.AcceptDeclinePrivacy policy